Step into an imagined landscape installation of hand-cut trees inspired by a cross between American and Japanese impressions. Natural Selection functions as an artist-in-residence with UCSC alumna, Katerina Lanfranco. The exhibition includes a large-scale, handcut paper, site-specific installation. The large room construction will be made on site, and in response to the Sesnon Gallery architecture, surrounding landscape and will be produced in collaboration with UCSC art students.

February 1st, 2012
ARTIST INTERVIEWS / PODCAST
On January 31, 2012, multi-media installation artist-in-residence and UCSC alumna, Katerina Lanfranco came into the UCSC, KZSC studio to talk on Artist on Art about her new large-scale, site-specific, hand-cut installation made in collaboration with UCSC students. Katerina was accompanied by one of those students, Heidi Kramer, who assisted her greatly in the production of this fabulous panoramic and completely embodying work entitled, Natural Selection.
Katerina lives in NYC where she makes paintings, mixed media works, sculptures, and installations. She is a studio arts educator at the Museum of Modern Art in NYC. She is represented by the Nancy Hoffman Gallery and was the recipient of the 2010 N.E.A. Japan-US Friendship Commission Creative Arts Fellowship.
Please take a look at the newly created blog, Natural Selection Art Show.
Exhibition Dates are February 1 – March 16, 2012 with Gallery Reception, Wednesday February 1, 5:00- 7:00 pm with artist talk at 6:30pm.
Mitsuyo Tao, president of the Ikenobo Ikebana Society [Northern California Chapter], and Don White of the Watsonville and Santa Cruz Bonsai clubs, came to the Sesnon gallery this week in preparation for their demonstrations that will be taking place on for the First Friday Art Tour, February 3rd from 2:00 – 4:00PM at the Sesnon Gallery.

Follow link to view video of live interview:
http://www.artistsonart.net/katarinalanfranco/
Posted by KL at 2:33 PM No comments:

This exhibition will function as an artist-in-residence with UCSC alumna, Katerina Lanfranco. The exhibition for Winter Quarter at the Sesnon Gallery includes a large-scale, site-specific hand cut installation made while at UCSC with the collaboration of art students. By Scott Rappaport
Katerina Lanfranco has come a long way since she graduated from UC Santa Cruz in 2001 with a BA degree in art.

Lanfranco is now a professional artist living in Brooklyn.  She is represented by the Nancy Hoffman Gallery, and currently teaches at the Museum of Modern Art, LIM College, and Fordham University in New York City. This winter quarter, Lanfranco returned to Santa Cruz to work with 10 students from UCSC’s Artand History of Art and Visual Culture departments to create an ambitious exhibition at Porter College’s Sesnon Gallery.

As Sesnon Gallery director Shelby Graham describes it: “We had a living and breathing studio experience; we turned the gallery into a student workshop.”

The UCSC alumna worked with Graham and the students to create Natural Selection, a large-scale, hand-cut paper installation created specifically for the Sesnon Gallery space.

Throughout the construction of the project, Lanfranco shared with students personal anecdotes, experiences, and real-life challenges she has faced as a professional artist working in New York.

“Or it’s challenging the myth of the solitary genius artist,” she added. “Art can be a collaborative experience, you don’t have to look so far for inspiration or engagement.”

“I think sometimes people are afraid of pursuing art,” Lanfranco observed. “So I try to lessen that fear by sharing my own processes—keeping the thrill, but taking the fear and mystery out of it.”

When she first flew in from New York, Lanfranco asked the groundskeeper at Porter College for a tour of the trees around the college, which influenced the design of the project.

Responding to the environment, she then had the student apprentices do research and study technical aspects of the project to get them inspired and help them understand the artistic process.

“I really see it as a reciprocal experience,” said Lanfranco. “The more I feel the generosity of the students, the more I want to give back. It’s been a really great experience.”

The students seemed to unanimously agree. “Her work ethic is inspiring,”said Heidi Cramer, a 26-year-old junior who transferred to UCSC from Arizona to study art. “I had a lot of expectations for this project, and they’ve been surpassed.”

“It’s made a world of difference to a mixed media artist like myself…learning new skills—how to do an installation, what an artist does with their time all day, how to communicate--these are all things I can apply to my career,” she added.

Leia Delabahan, a 20-year-old senior, noted that working on the exhibition was a tremendous opportunity for her as a student.

“It’s been very rewarding—to be able to work with an artist who has made it professionally, and who went to the same school as you did,” said Delabahan. “I had this particular image in my mind of a New York artist before this exhibition. But since I worked with Katerina, I’ve realized that you can live a busy, hectic artist’s lifestyle in New York City and still be a very real, down-to-earth person.”

“Plus this project gave me hands-on experience that I would not be able to get in a regular classroom,” added Delabahan. “This is

exactly what I want to do after college.”

For alumna Lanfranco, the experience was rejuvenating.

She said she really enjoyed being on campus again and made the most of her brief residency, happy to find UCSC students still really curious, open minded, and engaged.

“I think of my time at UCSC as extremely nurturing,” said Lanfranco. “It’s surprising that coming back 10 years later, it’s still nurturing--in a completely different way.
“With the generosity and engagement of the students, the totally welcoming arms of the Art Department and professors, the support of Sesnon director Shelby Graham—it’s almost like a family reunion.”

Seeing the Forest for the Trees Katarina Lanfranco sketches out the plan for her site specific installation "Natural Selection which in the Sesnon Gallery. Photo by Sal Ingram
The wall of trees wraps around, from spring through the seasons, from the redwoods of the north Pacific to the cherry blossoms of the south, opening up into a cathedral grove.

View original article at:
http://www.cityonahillpress.com/2012/01/31/seeing-the-forest-for-the-trees/
Posted by KL at 9:25 AM No comments:

Blossoming Plum trees are in full bloom outside of the Sesnon Gallery!
They extend the Natural Selections exhibition out of the gallery space and into the Porter College courtyard. 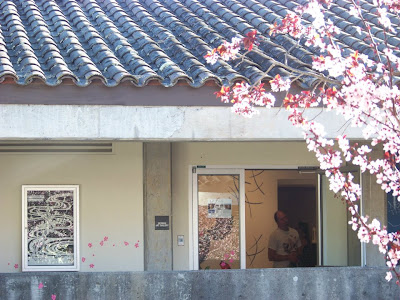 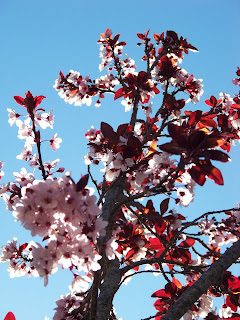 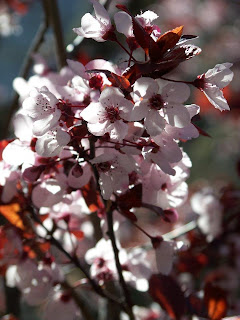 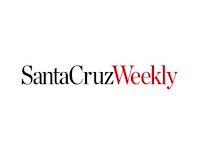 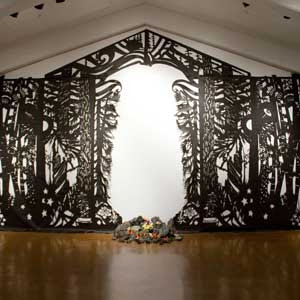 Shining black deer hoofprints lead the visitor up the stairs of Porter College's D building. Following this nature trail—subtly applied to cast concrete and playfully punctuated by pink blossoms—we are led into a transformation of bare walls into a vivacious forest of the imagination, a forest entirely created of hand-cut black paper.
A six-month residency in Japan last year on a Japan-U.S. Friendship Commission fellowship immersed New York artist (and UCSC alumna) Katerina Lanfranco in the intricate practices of katagami (paper cut-outs) and ikebana (flower arranging). Looking at both the natural world and her own bio-intensive artwork through the lens of another Pacific Rim culture armed Lanfranco with a sensitivity to the natural world currently translated into a room-sized installation at the Sesnon Gallery. The tour in Japan clearly expanded Lanfranco's vocabulary of cultural archetypes, and the current show builds upon an evolving network of biological perspectives.
Guided by Lanfranco's re-visualization of the trees and plants of the UCSC campus into a magical artifactual landscape, a team of student assistants worked with layers of coated black paper, cutting and carving, until they had lined the walls—up to the very ceiling—with an exquisite tracery of light and shadow. As with any great forest worth its chlorophyll, the details of Lanfranco's Natural Selection emerge only gradually. This is a space designed as much for meditation as for inspiration. To enter the Sesnon Gallery, from now until March 16, is to be intertwined with a world where ginko leaves morph into butterflies, and the graceful arabesques of magnolia support an almost hidden scaffolding of insects and birds. Ablaze with bamboo and stars, these silhouetted shapes shift from tree into bird into vine into bee. Substantial yet fantastical, the installation—which is "announced" by a separate wall of colored paper, including cutout "ikebana" chrysanthemums—captivates in a way that is both rococco and deliciously wild.
Supporting the main installation and expanding its metaphorical influence are two other shows involving the aesthetic miracles wrought with and upon cut paper. In the small adjoining gallery, a group of cut-paper explorations called “Clear Cuts” offers insight into the world created in miniature. From the beauty of Kara Walker's celebrated silhouettes to gorgeously folded and cut, all-white woodland windows in A Tree a Day, January 2010 by Davenport artist Felicia Gilman, the room hums with the microcosmic viewpoint available when the hand shapes figures into vibrant metaphors. The hand-cut-and-stitched romance novel by Lauren Scalon, for example, puns wittily on the entire idea. The Porter Faculty Gallery next door boasts a fascinating and accomplished suite of experimental laser-cut intaglio prints by Richard Wohlfeiler, master of a process blending ancient woodcut with the forefront of digital inquiry. Eye candy with depth. 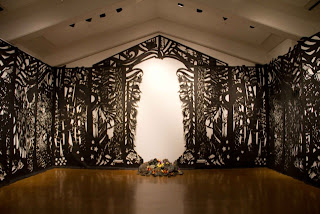 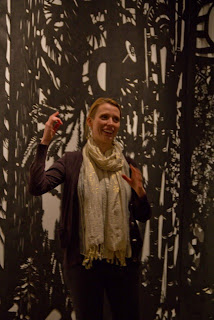 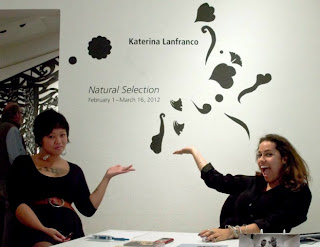 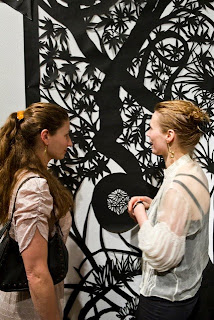 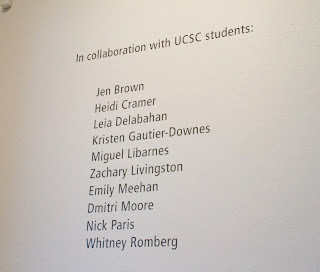 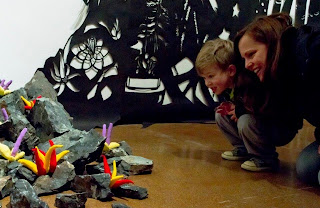 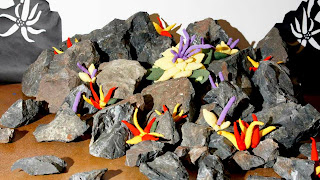 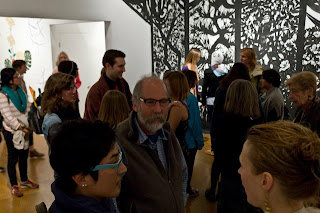 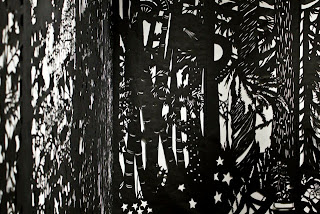 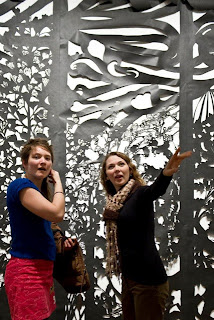 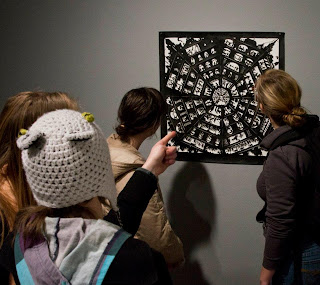 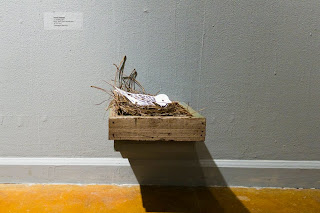 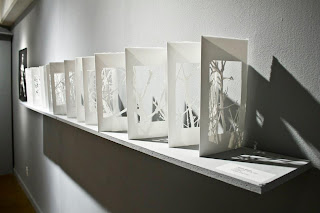 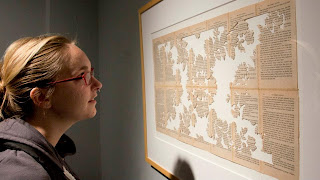 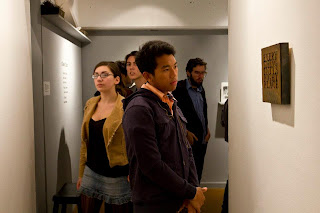